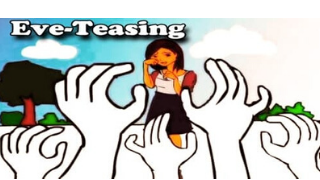 It is a fact that eve-teasing is a regular occurrence in the lives of Bangladeshi women. In fact, the entire Indian sub-continental region is afflicted with this malaise. Neighboring countries like Sri Lanka, India, and Pakistan, etc, show similar ratios of eve-teasing. That indicates a certain kind of the wrong mindset of men who honor no respect for womens dignity. Eve teasing is a traumatic experience for women. It can leave deep psychological scars which can be hard to heal. Eve-teasing has resulted in many unfortunate events in the lives of women. Sometimes, it has made parents keeping their daughters at home away from school or even marrying them off at an early age. Delusional parents concerned about the safety and honor of their daughters can literally ruin their future. Eve-teasing has dangerous consequences for women and not for men as it can deprive them of their freedom, nutrition, and education. Paradoxically, it is women who tend to believe that it is themselves for having invited harassment. Instead of fighting back, many women tend to believe that it is their fault which caused them such indecent behavior from lecherous males. It reflects how deeply eve-teasing impacts women. In fine, they find it hard to trust people. They no longer feel inclined to trust their male friends. Sexual harassment or other forms of molestations also impact the personal and academic development of women. The experience leaves them bitter and cautious for the rest of their lives. We need to be careful of it.