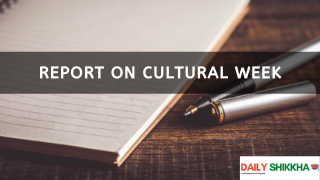 Write a Report on A Cultural Week Observed in Jhenidaha K. C. College

Syful, College reporter, Chittagong; 28 March 2018: Jhenidaha K. C. College has celebrated the Cultural Week-2019 with ceremonial and colorful programs. The programs continued for a week. Every day the competitions began at 10 a.m. and ended at 2 p.m. On the first day our Principal inaugurated the function through an interesting speech. On the following day, the main competition began. Dividing the competitions into two parts, the functions were observed peacefully. During the first half of the appointed time the literary competitions were held. In the second half cultural competitions were held. Every day expert literary figures and artists were invited as judges for the competition. In the literary competitions, there were English and Bengali recitation, debate, general knowledge, extempore speeches, pre-appointed speeches, storytelling, jokes, calligraphy, etc. in the cultural part, there were patriotic songs, Rabindra sangeet, Nazrul giti, folk songs, modern songs, one-act play, dance, etc. on the concluding day a very attractive cultural function was performed by the winner competitors. Dr. Anisuzzaman distributed prizes among the winners although all winners were not skilled, some of them did much well. Aftere all, the students, teachers and other erudite enjoyed the celebration to their heart’s content.
Was this article helpful?
YesNo