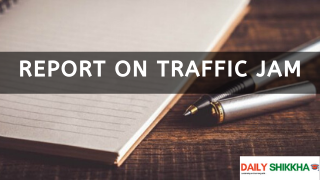 Write a Report on Traffic Jam causes suffering in Dhaka.

Syful, Staff reporter, Chittagong; 28 March 2018: Traffic Jam is a common affair in the Mega-City Dhaka. The indiscriminate playing of rickshaws, haphazard parking of vehicles, and small shops in the foot-paths are the main reasons behind the traffic jam in the town. City dwellers said more than 2,50,000 rickshaws are plying in the town and most of the rickshas have no license. They are not aware of traffic rules and as a result accident and traffic jams are being occurred off and on. On the other hand, haphazard parking of vehicles is also responsible for a traffic jams. Most of the vehicles parked at several unscheduled points violating the traffic rules. Pedestrians said, they are facing problems as the small traders and motor repairing workshops occupied the footpaths. City dwellers said school-going children can not move to their schools freely. Very often they become victims of ‘road accidents due to the reckless movement of the vehicles. The people of the town have urged the authorities concerned to look into the matter and take immediate steps in this connection.