Write a Report on A Horrifying Road Accident. 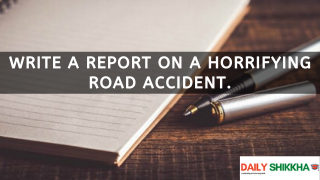 Syful, Staff reporter, Chittagong; 28 March 2018: A terrible road accident took place near the Sitakund bus-stand last night. Seven people including the driver of the bus died and about twenty people including three women and two children were severely injured in the accident. The injured were rushed to the hospital by police. A passenger bus carrying forty people was going to Chittagong from Sitakund. The bus was overtaking a rickshaw. A stone loaded truck was coming from the opposite direction and it confronted the bus while crossing. The bus was overturned and five people including a woman died on the spot while many were fatally injured. One more woman and a child died while being taken to hospital. The air of the nearby area was filled with the crying and groaning of the victims. The people around came forward to rescue the passengers trapped inside the bus. The police of the local thana reached the spot within fifteen minutes. They helped to take the injured people to the Sitakund Sadar Hospital. Ten men were released after giving primary treatment while others are struggling for life. A case was filed in the Sitakund thana by police.