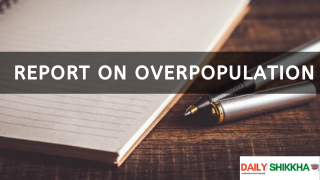 Write a Report on control overpopulation.

Syful, Staff reporter, Chittagong; 28 March 2018: Population problem is one of the burning questions in Bangladesh. In population, Bangladesh is the 8th largest country in the world but is the 90thin area. The growth rate of her is about 1.37 which is double than of any other country in the world. Though the population is an asset in many countries our population is a curse for us. Because it created thousand of problems in every sector of government developing programs. The country would not able to give proper food, clothes, residence, education facilities, medical facilities, and other basic necessaries of life to her people. About one-third of our young and educative people are being unemployed and they participate in various social crimes. So, we should be controlled overpopulation at any cost. It is high time to control overpopulation. The government has already taken the necessary steps to control overpopulation. Early and polygamy marriage should not be permitted. No family should be permitted to birth over two children. Girls should be educative and should not marry them before 18 and boys should not be permitted to marriage before 22 years. By controlling the growth rate of the population many countries are developing quickly. Why will we leg behind? We should be conscious citizens. We should co-operate with the government to remove the curse of the population problems and to control the growth rate of the population.