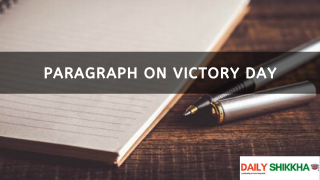 Victory day means our winning day of the Liberation War Pakistani Army. In 16thDecember 1971 the heroic son of Bengal defeated Pakistan Occupation Forces. So, 16th December is the Victory Day of Bangladesh.

The Victory The day is a red-letter day in the history of our country. We achieved our independence after much sacrifice on this day in 1971. On the night of March 25, 1971 the Pakistani army fell upon the unarmed sleeping Bangalees. They killed millions of innocent people. But the Bangalees were not cowards. They built up a strong resistance against the occupation forces. Bangabandhu declared the independence of the country of the 26th March 1971. The Bangalees took arms and joined the War of Independence. After nine month’s bloody war, the red sun of independence rose in our soil on 16 December 1971. So this day is very important in our life. Every year people observe this day with great solemnity. They remember the supreme sacrifice of the heroic sons who died for the country and pay glowing tribute to their departed soul. The day begins with a gunshot. The whole country wears a festive look. The national flag is hoisted on the top of each house. Many meetings, seminars, symposiums, and discussions are held. People of all walks of life to the national memorial in order to offer flowers to display profound homage to the martyred valiant soldiers. This day is a day of great joy, hope, and inspiration. To build Bangladesh ‘Sonar Bangla’ is the oath of this day. We have to celebrate it truly.