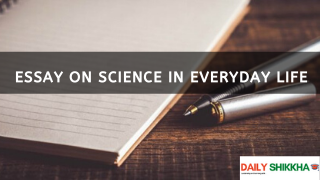 Write an Essay on Science in Everyday Life.

Inception: The age we live in is an age of science indeed. Whenever we look at the land, water, and the air we can see the gifts or blessings of science. Science has made our life easy and comfortable. Everywhere we can see the glorification of science.

Wonders of science: Science, in its rapid progress, goes on creating wonder after wonder. In fact, the wonders of modern science are too many to describe here.

Nuclear energy is, perhaps, the most wonderful of all the achievements of modern science. It has made it possible in making atom bomb, a hydrogen bomb, and the missiles.

Besides these, Computer, Internet, X-ray’s, ECG, Radio Therapy, etc. are the wonders of modern science too.

Merits: The uses of modern science can be seen and felt in everyday life and everywhere in the world. In mills and factories, industries, agriculture, medical, transport, communication everywhere we can see the uses of modern science. Modern civilization would come to a standstill if there was no electricity. Life would face its extreme crises if the modern amenities of life are neglected. Agricultural and industrial development has been possible because of modern science. In fact, we cannot live or do without science.

Demerits: Nothing is of unmixed blessing. By the invention of the Atom bomb, the hydrogen bombs, missiles, explosives men may efface the human race and its beautiful creation in the world. Atom bomb used in Hiroshima and Nagasaki in World War II have buried the 2 populous and prosperous cities of Japan in no time. The use of Hydrogen bombs may bring the total destruction of a country and a nation in the twinkle of an eye.

Decisive Statement: In fact, we hardly know much we owe to science in the daily affairs of our life. Life without modern science cannot be conceived today. Modern science is like Aladdin’s lamp. It does what was supposed to be impossible yesterday. When and where it will end nobody can say, but this much can be said that it will go on working and creating much more wonders in the days to come.